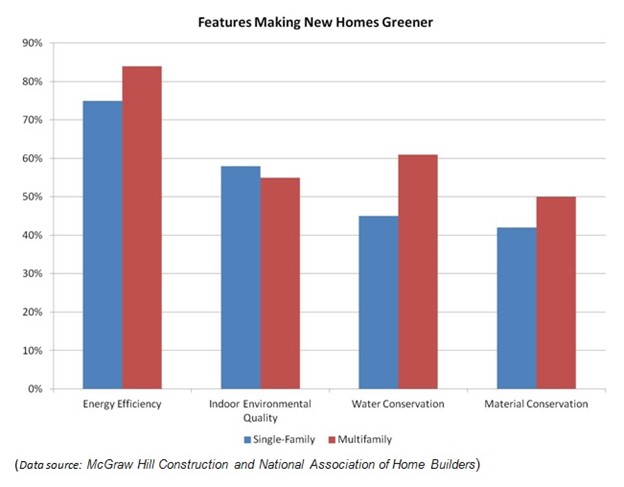 There’s a lot of potential for improving the energy efficiency of the existing housing stock.

While conservation features for homes have received a lot of attention in recent years, another growing trend is the installation of power production elements. For example, the McGraw Hill data reveal that 12 percent of single-family builders reported installing solar photovoltaic panels in some of their homes. Even more popular in 2013 was the inclusion of geothermal heat pumps, which provide heating and/or cooling using the earth as a heat source in the winter and a heat sink in the summer. The data indicate 26 percent of single-family builders are installing heat pumps in some of their homes.

To be sure, the limiting factor for builders incorporating green building practices is cost. The McGraw-Hill survey found that the increased cost necessary to construct a green home was, on average, about 8 percent of total development costs in 2013. This is lower than in earlier surveyed years (11 percent in 2006 and 10 percent in 2008) suggesting that costs may fall over time as experience with green building practices and products grows. This appears to be case for individual developers. For example, the survey found that single-family builders who reported at least 30 percent of their construction as green cited their incremental cost as 5.7 percent on average. Nonetheless, the issue of cost is a key concern for housing and emphasizes the importance of letting consumers determine what features to include in a home.

Of course, for homebuyers to select a more energy efficient and green home they need to be aware of how a home performs. Among single-family builders, the National Green Building Standard (NGBS) is the most commonly used green building certification. The GHBA’s Green Built Gulf Coast program adheres to this standard and has certified more than 11,000 homes since it’s adoption of the program in 2010. Consumers can rely on such certifications to know a given home meets an approved set of standards. For more information on Builders and Vendors who build and sell green products, visit our Green Built Gulf Coast website at www.greenbuiltgulfcoast.org.

While newly built residences are increasingly energy efficient, the existing housing stock is the untapped low-hanging fruit in terms of future activity with respect to conservation and other green building practices. For example, Department of Energy data indicate that homes built during the 2000s use on average 37,100 British Thermal Units per square foot annually. Homes from the 1980s use more – 43,500 BTUs annually. Homes built prior to 1940 (15 percent of the nation’s housing stock) use on average 51,600 BTUs annually per square foot.

Improving the quality of the more than 114 million renter and owner-occupied housing units built before the year 2000 remains an important objective and business opportunity for remodelers and developers. Certification for whole-house remodeling exists, which is an opportunity for existing homeowners to keep in mind as they consider differentiating their home when it comes time to sell.

Green Tip of the Day
Unplug battery chargers when the batteries are fully charged or not in use. Many chargers continue to draw power even when the device is not plugged in.
TWEET THIS