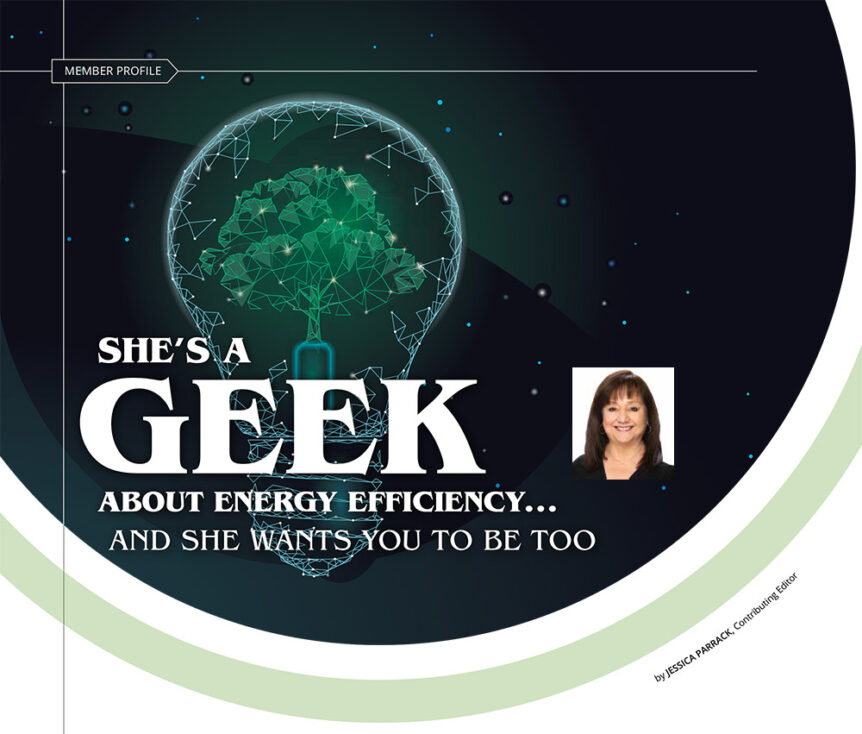 Her illustrious career in the building industry could be summed up under one title for Kathy Howard, advocate for change. When Howard started years ago as an auditor in existing homes for a utility company, there was physical paperwork and little in terms of codes for energy efficiency. Little did she know, a move into a new residential construction program promoting higher energy efficiency measures to builders would lead her to a passionate career in energy efficient building before the term “Green Building” was cool.

Howard’s father introduced her to the building industry when he started a small custom builder’s new construction and residential program when she was in high school. Howard reminisces that the times her father would bring her on site with him were the catalyst for her passions today. “I didn’t realize the impact it had on me watching him inspect the homes when, as a high schooler, I would have rather been at the mall. But something stuck with me during my time with him.”

Soon after that, Howard began working as a clerk for the family business, receiving payments from customers. This would in turn influence her decision when applying for college. Howard confidently headed into the business world, deciding to pursue a career in financing and graduating from the University of Texas. Her first post-grad job was as an existing home auditor for a utility company before transitioning to promote higher energy efficiency measures for new home builders. The next 20 years of her career built on what her father had exposed her to and set Howard on a road that would lead to her passion, advocating for home energy efficiency.

When Texas mandated the first energy code in 2000, Howard saw the opportunity to go private with her experience in the field. “This is where the passion began, everything before that was work,” Howard laughs. “Learning the trade and things like the Manual J calculations before laptops took over, that was all work.”

With the help of a business partner and financial backer, Howard’s company serviced 10,000 homes in the City of Houston alone within the first three years, she states proudly. For a new company with no marketing budget, Howard knew they had to get creative if they wanted to get their name out to builders. The new mandated codes meant that builders had to open their doors to consultants like Howard. With her past experience, she recognized her edge in the industry. Howard decided the best way to get her name out there was to get involved in the local home builders association. Her company was wildly successful. Years later, she was given the opportunity to sell the business. Howard could then focus on the second passion of her career, finding a seat for energy efficiency and her builders within the decision-making places of the industry.

Howard’s involvement with the Greater Houston Builders Association (GHBA) led to this fervor of giving back to the building industry. As she describes it, “part of my life mantra is to always participate in our local home builders association.” She started out on the Education for Green Building Committee. This participation led to chairing committees, which led to a seat on the board of GHBA. From there, she began participating at the state level with the Texas Association of Builders (TAB), and now currently sits on the Sustainability Committee for the National Association of Home Builders (NAHB). All of this culminated in one of the top honors of her career when she was named a Lifetime Director for TAB.

In 2000 when the Home Energy Ratings Score (HERS) was established and the first International Energy Conservation Codes (IECC) were adopted, homes built that year received an average score of 80. Howard is proud to point out that homes today have a score of 65, which to her is simply phenomenal. The code is updated every three years, meaning there will be an update in 2021. “We are looking to reduce the HERS rating another 15-20%.”

Howard says that 2021 builders should be looking at installing electric vehicle charging stations in garages, building solar ready homes, increasing the performance of air conditioning systems and using foam insulation instead of fiberglass, to name a few changes.

“All of these things excite me because I’m a geek!” Howard laughs with delight, talking about the new code updates. Howard further notes that energy efficiency codes are only going to continue to get stricter. “My job is to stay in front of what’s coming and keep builders advised. I want my builders to know what’s coming for 2030 so they can get ahead of the curve.”

All of the work Howard puts into learning these updates is for the benefit of her builders. Admittedly, Howard understands that it is expensive to make these changes happen, not just for the builders, but for potential homeowners as well. Every time house prices rise, more potential buyers are knocked out of the market. Howard wants to combat that as much as possible by participating with those association committees so she can bring that information to her builders to help prepare them.

Howard strongly emphasizes that builders who embrace energy efficient builds will actually start saving money. There are several rebate opportunities she offers to builders who build energy-efficient homes, along with a recently extended tax deduction that can award builders with $2,000 per home, something Howard is very proud to have personally helped bring to Texas builders. “The Codes & Standards Committee at TAB introduced the software into the Texas market. It has since brought in millions of dollars in tax credits to thousands of builders across the state.”

Less callbacks are another motivating factor Howard pushes to her builders. Over the years, she has noticed the builders that build more energy efficient homes receive less callbacks from their homeowners. Howard believes that any way she can help lessen callbacks is more money and time in builders’ pockets. “I have builders asking me, ‘How do I build the best, most durable home, Kathy?’ The answer I give is to build energy efficient because it’s a win-win for both of us.”

Building high performance homes should be builders’ top priority in Howard’s eyes because she sees how happy that makes homebuyers. This in turn results in more referrals by satisfied customers, which equates to more long-term sales for builders. Howard believes all of these items have motivated builders to go the extra step towards energy efficient homes. It’s just one of the things that keeps her excited to go to work every day and her love of the job very much alive.

ADVOCATING FOR THE FUTURE

“We realize the one constant thing in the building industry is change. I want to make sure I have a seat at the table to see that the change happening makes economic sense for the homebuyer and builder,” Howard states as another facet of her work mantra. Indeed, Howard is deeply committed to the educational part of her job.

She was a founding member of the Green Built Gulf Coast Program (GBGC) with the Greater Houston Builders Association, as well as the South Central Partnership for Energy Efficiency (SPEER). Recently, Howard was elected to the Residential Energy Network (RESNET) board. She wants her builders to have a voice at every place of change in the industry and works tirelessly to make that representation happen on their behalf.

For Howard, having the opportunity to provide input with the intention to make a difference on behalf of the builders is something she is immeasurably proud of. She believes it has brought great value to her work, she reflects, “I look back and ask myself, ‘How did you do all that, Kathy?’ Well, I worked a lot of hours!”

Howard knows that these next steps in energy efficiency are going to be hard on builders, but she says the industry has to agree that the climate is changing and homes should be built as efficient and durable as possible for the future. By utilizing the resources builders have now, homes should last long into the future and cost homeowners less overall because they consume less energy.

One of the reasons Howard pushes for more energy-efficient homes was put forth during the RESNET Conference she attended in 2000. The conference set a goal to reduce the carbon footprint of the industry by 2030 and push to get houses as energy efficient as possible within that timeframe. For those at the conference, the main takeaway was the reduction of people’s carbon footprints. From where the industry was decades ago to the technology available today, it is the popular opinion that the building industry will be able to make these energy efficiency goals. Howard herself is incredibly optimistic that the industry is well within its technological means to easily make those goals a reality.

Howard notes, “When I talk about where my passion in this lies, it is about ensuring that my two children and their children have the same access to resources, which range from clean water and air, to being able to pick the size of their house; that all those options are available for those next generations. And the only way that can happen is if we do what we need to do now.”

To keep doing her part in this agenda, Howard is currently working as the director of strategic accounts with governmental affairs, which she sees as one of her greatest duties on behalf of the industry. Howard feels beyond blessed to continue her involvement, with the support of her employer, in all the governmental affairs committees she participates in with the builders associations on all levels. Howard has felt the need to continue to grow in the industry, leading her to add quality assurance inspections for builders to her ever-growing lists of passions.

She is optimistic for a future where all homes are built to the highest level of energy efficiency so they can be enjoyed for many long, happy years to the benefit of both the builder, the homeowner and of course to the precision of the ever-present, ever-changing codes.

Green Tip of the Day
Installing more ceiling fans can create a breeze which makes you feel three to four degrees cooler.
TWEET THIS